Nava'i believed that Chagatai and other Turkic languages were superior to Persian for literary purposes, an uncommon view at the time, and defended this belief in his work titled The Comparison of the Two Languages. He emphasized his belief in the richness, precision, and malleability of Turkic vocabulary as opposed to Persian.[5]

Because of his distinguished Chagatai language poetry, Nava'i is considered by many throughout the Turkic-speaking world to be the founder of early Turkic literature. Many places and institutions in Central Asia are named after him.

Alisher Nava'i was born in 1441 in Herat, which is now in north-western Afghanistan. During Alisher's lifetime, Herat was ruled by the Timurid Empire and became one of the leading cultural and intellectual centres in the Muslim world. Alisher belonged to the Chagatai amir (or Mīr in Persian) class of the Timurid elite. Alisher's father, Ghiyāth ud-Din Kichkina (The Little), served as a high-ranking officer in the palace of Shāhrukh Mirzā, a ruler of Khorasan. His mother served as a prince's governess in the palace. Ghiyāth ud-Din Kichkina served as governor of Sabzawar at one time.[4] He died while Alisher was young, and another ruler of Khorasan, Babur Ibn-Baysunkur, adopted guardianship of the young man.

Alisher was a schoolmate of Husayn Bayqarah who would later become the sultan of Khorasan. Alisher's family was forced to flee Herat in 1447 after the death of Shāhrukh created an unstable political situation. His family returned to Khorasan after order was restored in the 1450s. In 1456, Alisher and Bayqarah went to Mashhad with Ibn-Baysunkur. The following year Ibn-Baysunkur died and Alisher and Bayqarah parted ways. While Bayqarah tried to establish political power, Alisher pursued his studies in Mashhad, Herat, and Samarkand.[6] After the death of Abu Sa'id Mirza in 1469, Husayn Bayqarah seized power in Herat. Consequently, Alisher left Samarkand to join his service. Bayqarah ruled Khorasan almost uninterruptedly for forty years. Alisher remained in the service of Bayqarah until his death on 3 January 1501. He was buried in Herat.

Alisher Nava'i led an ascetic lifestyle, "never marrying or having concubines or children.

Under the pen name Nava'i, Alisher was among the key writers who revolutionized the literary use of the Turkic languages. Nava'i himself wrote primarily in the Chagatai language and produced 30 works over a period of 30 years, during which Chagatai became accepted as a prestigious and well-respected literary language. Nava'i also wrote in Persian (under the pen name Fāni), and, to a much lesser degree, in Arabic.

Nava'i's best-known poems are found in his four diwans,[3] or poetry collections, which total roughly 50,000 verses. Each part of the work corresponds to a different period of a person's life: 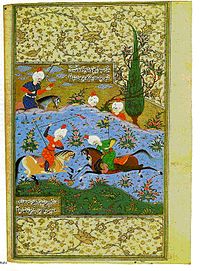 A page from Nava'i's diwan. From the library of Suleiman the Magnificent.

To help other Turkic poets, Alisher wrote technical works such as Mizan al-Awzan (The Measure of Meters), and a detailed treatise on poetical meters. He also crafted the monumental Majalis al-Nafais (Assemblies of Distinguished Men), a collection of over 450 biographical sketches of mostly contemporary poets. The collection is a gold mine of information about Timurid culture for modern historians.

Alisher's other important works include the Khamsa (Quintuple), which is composed of five epic poems and is an imitation of Nizami Ganjavi's Khamsa:

Alisher also wrote Lison ut-Tayr (لسان الطیر or Language of Birds, following Attar's Manteq-ol-tayr منطق الطیر or Speeches of Birds), in which he expressed his philosophical views and Sufi ideas. He translated Jami's Nafahat-ul-uns (نفحات الانس) to Chagatai Turkic and called it Nasayim-ul-muhabbat (نسایم المحبت). His Besh Hayrat (Five Wonders) also gives an in-depth look at his views on religion and Sufism. His book of Persian poetry contains 6,000 lines (beits).

Nava'i's last work, Muhakamat al-Lughatayn (The Trial of the Two Languages) is a comparison of Turkic and Persian and was completed in December 1499. He believed that the Turkic language was superior to Persian for literary purposes, and defended this belief in his work.[11] Nava'i repeatedly emphasized his belief in the richness, precision and malleability of Turkic vocabulary as opposed to Persian.[12]

Below is a list of Alisher Nava'i's works compiled by Suyima Gʻaniyeva,[13] a senior professor at the Tashkent State Institute of Oriental Studies.[14]

Waqfiya – a documentary work by Nava'i. He wrote it under the pen name Fāni in 1481. Waqfiya depicts the poet's life, spiritual world, dreams, and unfulfilled desires. Waqfiya is an important source of information about the social and cultural life in the 15th century.

Layli wa Majnun (Layli and Majnun) – the third dastan in the Khamsa. It is about a man mad with love. Layli wa Majnun is divided into 36 chapters and is 3,622 verses long. It was written in 1484.

Lison ut-Tayr – an epic poem that is an allegory for the man's need to seek God. The story begins with the birds of the world realizing that they are far from their king and need to seek him. They begin the long and hard journey with many complaints, but a wise bird encourages them through admonishment and exemplary stories. Nava'i wrote Lison ut-Tayr under the pen name Fāni between 1498 and 1499. The poem is 3,598 verses long. In the introduction, the author notes that he wrote this poem as a response to Farid ud-Din Attar's Mantiq-ut Tayr.

Majolis un-Nafois – Nava'i's tazkira (anthology). Written in 1491–92, the anthology was completed with additions in 1498. It consists of eight meeting reports and has much information about some poets of Nava'i's time. Overall, in Majolis un-Nafois Nava'i wrote about 459 poets and authors. The work was translated three times into Persian in the 16th century. It has also been translated into Russian.

Mahbub ul-Qulub – Nava'i's work written in 1500, a year before his death. Mahbub ul-Qulub consists of an introduction and three main sections. The first part is about status and the duties of different social classes; the second part is about moral matters; the third, final part contains advice and wise sayings. Mahbub ul-Qulub has been translated into Russian. Some of the stories contained within this work originate from the Sanskrit book Kathāsaritsāgara which has, for example, the “Story of King Prasenajit and the Brāhman who lost his Treasure”.[15]

Munojot – a work written in prose by Nava'i in the last years of his life. It is a small work about pleading and repenting before Allah. In Munojot, Nava'i wrote about his unfulfilled dreams and regrets. The work was translated into English in 1990. It has also been translated into Russian.

Munshaot (A Collection of Letters) – a collection of Nava'i's letters written to different classes of people about various kinds of matters. The collection also includes letters addressed to Nava'i himself and his adopted son. Munshaot was collected between 1498 and 1499. The work contains information about Husayn Bayqarah and Badi' al-Zaman Mirza. It also contains letters expressing Nava'i's dream about performing the Hajj pilgrimage. In Munshaot, Nava'i provides much insight about political, social, moral, and spiritual matters.

Mufradot – Nava'i's work about problem solving written in 1485. In this work, Nava'i discussed the many different types of problems and offered his own solutions. The first section of Mufradot entitled Hazoin-ul-maoni contains 52 problems in Chagatai and the second section entitled Devoni Foni contains 500 problems in Persian.

Nazm ul-Javohir – Nava'i's work written in 1485 in appreciation of Husayn Bayqarah's risala. In Nazm ul-Javohir, the meaning of every proverb in Ali's collection of proverbs entitled Nasr ul-laoliy is told in one ruba'i. The creation and purpose of the work is given in the preface.

Risolai tiyr andohtan – a short risala that has only three pages. The risala, which seems to be a commentary on one of the hadiths, was included in Nava'i's unfinished work Kulliyot. Kulliyot was published as a book in 1667–1670 and consisted of 17 works. In his book Navaiy, Yevgeniy Bertels chose Risolai tiyr andohtan as the last work in his list of 22 works by Nava'i.

Sab'ai Sayyor (Seven Travelers) – the fourth dastan in Nava'i's Khamsa. Sab'ai Sayyor is divided into 37 chapters and is 8,005 lines long. The poem was written in 1485.

Saddi Iskandari (Alexander's Wall) – the fifth dastan in Nava'i's Khamsa. In this work, Nava'i positively portrays the conquests of Alexander the Great and expresses his views on governance. Saddi Iskandari was written in 1485 and consists of 88 chapters and is 7,215 verses long.

Siroj ul-Muslimin (The Light of Muslims) – Nava'i's work about Islamic Law. Siroj ul-Muslimin was written in 1499 and discusses the five pillars of Islam, sharia, namaz, fasting, the Hajj pilgrimage, signs of God, religious purity, and zakat. The work was first published in Uzbekistan in 1992.

Farhod wa Shirin (Farhad and Shirin) – the second dastan in Nava'i's Khamsa. Farhod wa Shirin, which was written in 1484, is often described as a classic Romeo and Juliet story for Central Asians. The poem is divided into 59 chapters and is 5,782 verses long.

Fusuli arba'a (The Four Seasons) – the common title of the four qasidas written in Persian by Nava'i. Each qasida is about one of the four seasons – Spring (57 verses), The Hottest Part of Summer (71 verses), Autumn (35 verses), and Winter (70 verses). 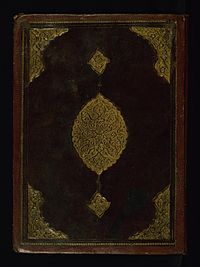 The top exterior of Nava'i's Khamsa (Five Poems) on display at the Walters Art Museum. This copy dates to the 16th century.

Khamsa – the common title of the five dastans by Nava'i that were written in 1483–85. With this work Nava'i established a precedent for quality literature in Chagatay. The five dastans included in Nava'i's Khamsa are:

Hamsat ul-Mutaxayyirin – Nava'i's work about Jami written in 1494. The work consists of an introduction, three sections, and a conclusion. In the introduction, Nava'i writes about Jami's genealogy, birth, upbringing, studies, and about how he became a scientist and a poet. The first part tells about Jami's spiritual world, and his ideas about creative works; the second part reveals the closeness between Nava'i and Jami in creative collaborations. The conclusion sheds light on Jami's death. It includes Nava'i's eulogy in Persian that consists of seven sections of ten lines.

Hayrat ul-Abror (Wonders of Good People) – the first dastan in Nava'i's Khamsa. The work is divided into 64 chapters and is 3,988 verses long. Hayrat ul-Abror was written in 1483.